Now that we’re at the end of November, this is a good time to make some plans for the near future. And while your to-do list may involve picking out the perfect turkey or wading through all of the boxes in the attic to find the Christmas decorations, it is also important to think about what’s in store weather-wise. According to the forecasters, we could be in for a bad winter in New Jersey, with very low temperatures, lots of ice, and plenty of snow, and it’s that latter one that could be particularly troublesome.

If you’ve ever had to shovel snow, you know it can be pretty heavy. Sure, the fluffy stuff isn’t usually too bad, but wet snow is a back-breaker. According to FEMA, fresh snow may only weigh about three pounds per square foot. However, that can exceed 20 pounds when it becomes wet. So does that put your home in danger?

How much snow can my roof withstand?

You’ll be happy to know that most roofs – and especially those built in the last couple of decades – can withstand at least 20 pounds per square foot of snow. But even if the weight surpasses that, roofs in good shape will still be fine due to three factors.

According to the building, codes contractors have to adhere to, rafters are required to withstand a certain amount of weight per square foot (PSF) of snow loads. The higher the PSF requirement is, the deeper the rafters need to be.

When snow falls on a roof and accumulates, the weight is transferred to the rafters. The part of the roof that transfers the snow is called the tributary area, and it extends outward, from the center of each rafter to the next rafter. This means the snow load is shared evenly.

Roofs typically don’t have a problem holding even a substantial amount of snow because it doesn’t usually stay up there for too long. After a storm, it generally does not take very long for snow to slide off a roof or start melting.

Warning signs to look out for

While it’s good to know that a solid roof probably won’t cave in after a lot of snowfalls, it’s important to still be vigilant about possible damage. If, for example, you hear popping or cracking sounds coming from above, that’s something that shouldn’t be ignored.

In that case, go into your attic and take a good look at the rafters. If you notice any cracks or bending, this is an indication that your roof is being strained. Or if doing an attic inspection doesn’t sound appealing, a roofing professional can handle that for you.

You should also look for cracks in the plaster or drywall around door frames on the upper floor. In addition, if doors have started sticking when you open and close them, this could be a sign that your home’s frame has shifted.

Should snow be removed from a roof?

Even when the snow starts piling up, your roof should be able to handle it just fine. You don’t need to worry about going up there to get rid of it. For one thing, this can be very dangerous. In addition, scraping snow off a roof can cause damage like cracks or holes, and this means you’ve created an easy way for water to get inside when the snow starts to melt.

Is your roof ready for what Mother Nature will throw at it?

The best way for your roof to hold up over the course of the long winter is to make sure it’s in great shape before the bad weather gets here. If you have noticed some issues or just want to have it looked at by an expert, get in touch with Blue Nail Roofing for a free consultation. You can call us at 973-937-8876 or just send a message through our online contact form.

What to Know Before Replacing a Historic Roof

Are you planning a roof replacement for your historic New Jersey home or business? Before your project gets underway, you’ll need to figure out some key details.  What type of roofing material is already present? Did you know that not all roofing companies are trained to work with all roofing materials? Before committing to a […]

Deciding Between a Roof Repair and Replacement

There are times when you can get away with repairing a damaged roof, but a full replacement may be the most cost-effective solution for the situation. Your roof is a vital component of your home because it prevents water, animals, and wind from getting in, keeping you warm, safe, and dry. Having a shelter is […]

The Top Roofing Material Options for 2021

When the time comes to replace your roof, doing some research and learning about each roofing material ensures you’ll make the right choice for your home. Choosing a new roof can be overwhelming. After all, there are all kinds of materials choose from, with each roofing type coming in multiple colors, as well.  The good […]

We leverage our detailed craftsmanship to solve roofing and siding issues with transparency and education. After a free consultation with us, our clients are fully prepared to make the best decision to protect their home for the next 30+ years. We have achieved rare certifications to guarantee the highest level of workmanship and offer the best warranties in the industry. We strive to make the entire process easy, from the first call to the final inspection. 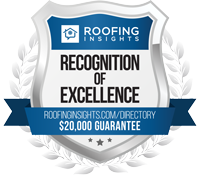 Financing Options
Trusted by Industry Leaders
Our commitment to craftsmanship has helped us achieve the highest certifications in the industry. We partnered with the best brands in the country who routinely inspect our work and allow us to provide incredible guarantees to our clients.

Ready To Get Started?

Learn How We can Help.